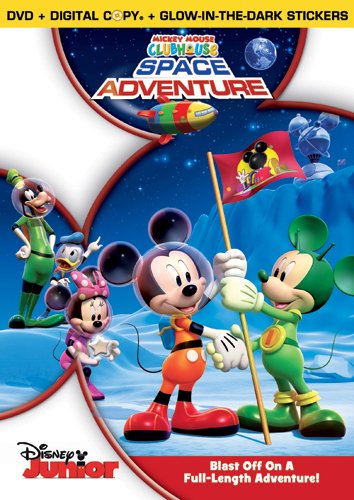 We are big Mikey Mouse fans, so we were excited to watch the Mickey Mouse Clubhouse: Space Adventure DVD that was just released onto DVD this month.

It’s Adventure Day and Professor Von Drake is sending Mickey and pals into the far reaches of outer space. The team blasts off in their Clubhouse Rocket in search of Treasure Stars that will point the way to
the Out-of-this-World Treasure, their ultimate goal. The interplanetary trip takes preschool viewers first to the Moon, Mars and the Rings of Saturn.

Along the way, the gang gets help from friendly space aliens Moon Men Chip and Dale, Martian Mickey and Pluto from Pluto but they also encounter sneaky Space Pirate Pete, who wants the Treasure all for himself. Eventually the Clubhouse Rocket’s crew and Space Pirate Pete manage to become friends, and they all follow the trail of the Treasure Stars to the mysterious Planet Mickey where they discover the location of the Out-of-this-World Treasure. It turns out to be a futuristic, space age version of the Clubhouse — the perfect meeting place for all pals across the universe!

This is a cute Mickey video that will keep your little one entertained. This DVD is 70 minutes long and includes the Never-Before-Seen Episode (Until At Least 1/3/2012): “Goofy’s Thinking Cap“. Our copy of the DVD even had some very cool glow in the dark Mickey Mouse stickers that my daughter immediately had to use.

Now time for some fun FREE Mickey Mouse Space Adventure Coloring Pages that you can print to color!

Got a Mickey Mouse fan on your shopping list? The Mickey Mouse Clubhouse: Space Adventure is available on DVD + Digital copy right now on Amazon for only $15.99. 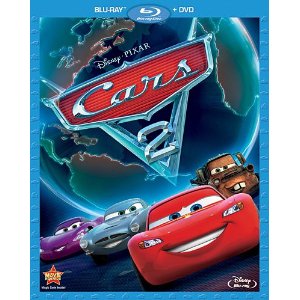 Ladies and Gentleman, start your engines!

CARS 2 has RACED to the shelves on Blu-ray™ Combo Pack, Blu-ray 3D™, DVD and Movie Download. As of November 1, you can get your hands on a copy of Cars 2 on Blu-ray, DVD and even instant movie download.

Since I took my children to the Disney’s Cars 2 Multi-City Tour last month, we were all excited to have a copy of Cars 2 on Blu-ray and DVD in our possession. We watched it this week as one of our family movie nights. Since we happen to be a family that is are “car enthusiasts”, this is really a cute movie to watch together. I think we all have our own favorite characters too. I think my favorite character is Mater!

Celebrating the 25th anniversary of Pixar Animation Studios, the high octane in-home release invites families and fans of all ages to come along on a journey around the world with the #1 animated film of the year and introduces an exclusive all-new animated short “Air Mater,” featuring the fan favorite character spinning his tales in an exciting adventure high above Radiator Springs. The must-own animated release also includes fascinating commentary from award-winning director John Lasseter and “Hawaiian Vacation,” the delightful animated short that accompanied the film in theatres. 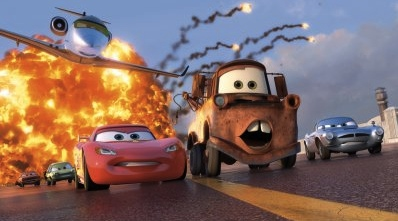 The immersive “Cars 2” bonus features include an one-of-a-kind interactive “World Tour” map that takes viewers through nine different locations, including those featured in the film and more. A global thrill-ride, it allows viewers to go behind-the-scenes with the Pixar artists and filmmakers as they circle the globe finding inspiration for the most international of all Pixar films to date. “Cars 2” is also the first Pixar film to be released in spectacular Blu-ray 3D.

“Cars 2” is available in-home several ways including Blu-ray, DVD and combo disc packs and movie download options. Planning to buy a copy? Be sure to click the image below to find out how you can save $5.00 off the Cars 2 5 Disc Combo Pack. 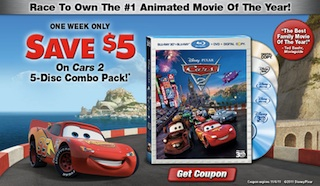 Right now the Cars 2 Blu-ray and DVD combo pack is on sale on Amazon for $24.99 & eligible for FREE Super Saver Shipping!

This weekend I took the kids to the Disney Cars 2 event that took place at Dave’s Pumpkin Patch in Sacramento on October 8, 2011. This was a free event that was put on by State Farm Insurance and the turnout was HUGE. So huge that I didn’t stay as long as I expected, but I had fun while I was there.

When I  heard about this event and that there were going to be life-size Disney Cars 2 vehicles that are real actual remote controlled cars, I knew I had to go. I just had to seen them in person. Even if it was going to be packed, I wanted to snap some photos of these cool Disney Cars with my new Nikon D5100 DSLR camera.

My goal was to get some cool photos and maybe grab a pumpkin or two! 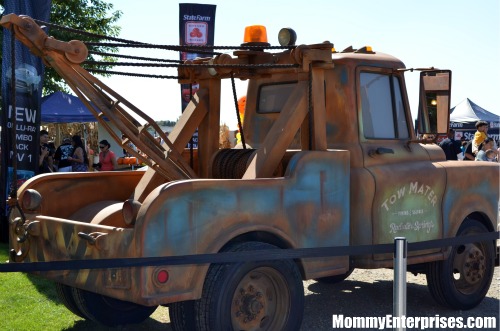 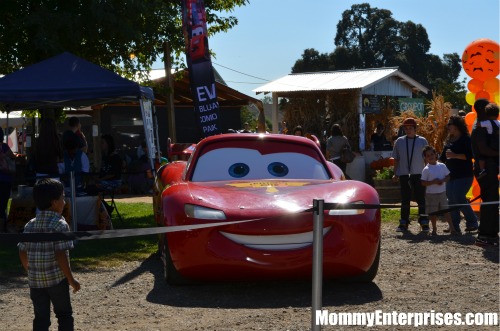 I wish I was able to get closer to these cars, but there was a really LONG line and I don’t like lines when I have my kids with me. We decided to do everything that didn’t have a line and that included watching real live pumpkin launching. I didn’t know about the pumpkin launching until I heard a loud noise, looked up and seen a pumpkin flying high in the sky. My kids and I dashed over to the pumpkin launcher and watched a few more pumpkins go flying in the air which they can’t stop talking about.

Take a peek at the cool pumpkin launcher….. 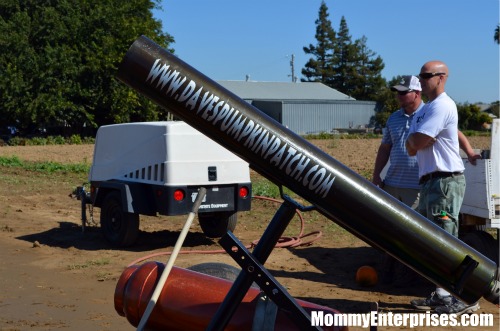 So there isn’t no way I was going to a pumpkin patch with the kids without picking some pumpkins. I let Hannah and Christopher roam the pumpkin patch and pick out a pumpkin that they are going to carve this month. I didn’t have much fun trying to get my son to leave. If you are in the Sacramento area, be sure to check out Dave’s Pumpkin Patch. If you are a Disney fan and the Disney Cars 2 Multi-City Tour is coming to your town, be sure to take advantage of this FREE event and be sure to arrive early!

Buy the Cars 2 Blu-ray and DVD combo pack on sale on Amazon for $24.99 & eligible for FREE Super Saver Shipping! If you are like me and like to collect Disney movies, you will want to to hurry and grab a copy of Disney’s The Lion King while it is out of the vault for you to snatch. Starting  Tuesday October 4, you can buy The Lion King Diamond Edition on Blu-ray 3D & Blu-ray Hi-Def Combo Pack for only a limited time.

The wait is over. For the first time ever, experience the majesty of Disney’s epic animated masterpiece as it roars off the screen and into your living room on Blu-ray and Blu-ray 3D. With a spectacular digital picture, spine-tingling high definition sound and immersive bonus features—you will feel the love for this critically acclaimed and universally beloved classic like never before.

Embark on an extraordinary coming-of-age adventure as Simba, a lion cub who cannot wait to be king, searches for his destiny in the great “Circle of Life.” You will be thrilled by the breathtaking animation, unforgettable Academy Award®–winning music (1994: Best Original Score; Best Song, “Can You Feel The Love Tonight”) and timeless story. The king of all animated films reigns on Disney Blu-ray 3D—magic in a new dimension. 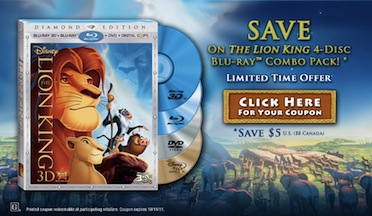 Planning on buying a copy of The Lion King? Be sure to click the image above for a $5 Discount. You can also purchase The Lion King Diamond Edition on Blu-ray / DVD combo for only $24.99 at Amazon.

Check out The Lion King on Facebook at: http://www.facebook.com/DisneyTheLionKing. 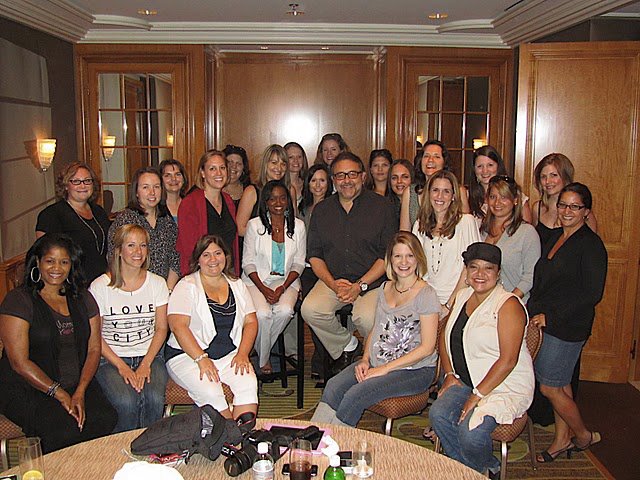 Last month was a very special month for me. At the end of last month, I was invited to take a trip to Southern California for the Lion King 3D Premiere in Hollywood. Not only did I get to attend the premiere of this movie, there were also fun Disney related events that I got to take part in.

One of those fun events that I was participated in was the blogger interview with producer Don Hahn and actress Niketa Calame. During this awesome interview, Don and Niketa talked about some of their experiences during the production of The Lion King and some of the history that most of us bloggers did not know.

The first thing that shocked me was that this film was originally not going to be called The Lion King. When they first started creating this story, it actually was going to be called King of the Jungle. Check out the video of the interview I took below to find out the other fun facts of The Ling King that we learned.

After watching my video, did you learn anything new about this Disney film?

The Lion King in 3D is roaring into theaters on September 16, 2011 for a two week run. After it leaves the theaters, it will then be released on Blu-ray, Blu-ray 3D, and an eight-disc trilogy set on October 4, 2011.